Dear customers, be careful with companies that offer a “CHEAP” taxi transfer (GETTRANSFER -GOOPTI), read reviews on the independent TRUSTPILOT website about  service of absolutely any company in Internet !!! 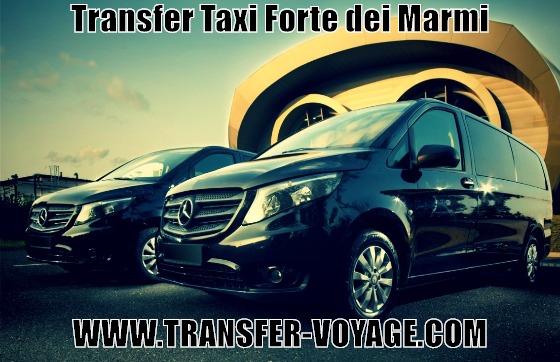 Before traveling to Italy, travellers have to ask the question “How much does a transfer or taxi cost from the airport to the city of Forte dei Marmi?”.

Contact us and you will receive a decent service at an affordable price, any type of transport: car minibus minivan bus or business class cars. Transfer Taxi from Forte dei Marmi to any city port or airport in Italy.

Forte dei Marmi is one of the most exclusive and elegant tourist resorts in all of Versilia. A small jewel that since the 60s has been a true style icon.

Fashions are launched in the locality, loves are born that are destined to end up on the pages of gossip magazines and the "good life" of nightlife and fashion is lived.

A tourism that sees a very large percentage of foreigners arriving by car taxi transfer from all Italian airports Bologna Pisa Florence Livorno Milan Malpensa Genoa Venice, have chosen Forte dei Marmi one of their favorite destinations. For this reason, the sumptuous villas surrounded by huge parks have multiplied in the city, and in particular in the Vittoria Apuana district.

As we have anticipated, the city is one of the favorite destinations for elite tourism, in search of luxury and a good life. The fame of the "Forte", as it is customary to call it, is increasingly growing. And to think that the whole area until the 17th century was completely swampy.

Luxury resort It began to populate following the opening of the quarries on the nearby mountains, which were followed by extensive reclamation operations. From the end of the 19th century tourism began in the area, as well as in the nearby towns, and since then it has been a constant growth.

Today Forte dei Marmi center is an open-air boutique. Starting from the main Piazza Garibaldi, dominated by Forte Lorense, called the fort of Forte dei Marmi, the streets of the small pedestrian center branch off. Part of its name derives from the fort, wanted by the Grand Duke of Tuscany to defend the landing at the sea. The remaining part derives from the marbles that were extracted in the nearby quarries and that passed through this area to be embarked on ships.

High fashion boutiques of the main Italian and international brands meet in the city center. These include Dolce & Gabbana, Versace, Gucci and Prada. Next to these boutiques there are shops of fine artisan products, restaurants, bars and cafes. As for shops, Forte dei Marmi is really second to none and allows you to experience a holiday of sea and shopping. All concentrated in a space in which it is really pleasant to move.

In fact, the Forte turns on foot or by bicycle, these are the two characteristic aspects of holidays in Forte dei Marmi. In the evening, then, it is not uncommon to see luxury cars go by: Maserati, Ferrari, Lamborghini, Minivan or Mercedes Minibus are at home on these roads.

Forte dei Marmi beach cannot be missing in a self-respecting holiday. The area is home to lifeguards and entrepreneurs in the sector, accustomed for decades to take care of the area as much as possible.

The coast is characterized by the presence of splendid bathing establishments. On the beaches of Forte dei Marmi it is frequent to meet VIPs, footballers, entrepreneurs and finance personalities. And, as you can easily guess, in Forte dei Marmi the sea is often synonymous with luxury. There are many prestigious establishments that offer relaxation and any service you can imagine. All for the maximum satisfaction of a tourism that is used only to the best.

The coast is sandy and the sea has water to envy many places. The characteristic of the seabed is that it is rather low, which allows you to be able to relax a few meters from the shore without struggling to keep afloat! If you are looking for an excellent sea, Forte dei Marmi will satisfy your needs, and we will take care of it by taxi transfer from the airport to Forte dei Marmi

The historic pier. Beautiful to walk here, the first jetty of Versilia imitated by nearby towns;

The position. On the border of Versilia with the province of Massa Carrara, it is close to both the other towns on the Versilia coast and to Liguria.

We provide taxi transfer services for tourists who need to travel and move from Forte dei Marmi to Versilia or Tuscany, Italian airports or ports.

We are available for:

Ncc Transfer Taxi for trips and tours in Tuscany

Transfer for events of any kind

Bus over 9 seats are on Request

You may also be interested in a transfer in the directions: Ancona, Rimini, Bologna, Verona, Florence, Rome, Venice, San Marino.